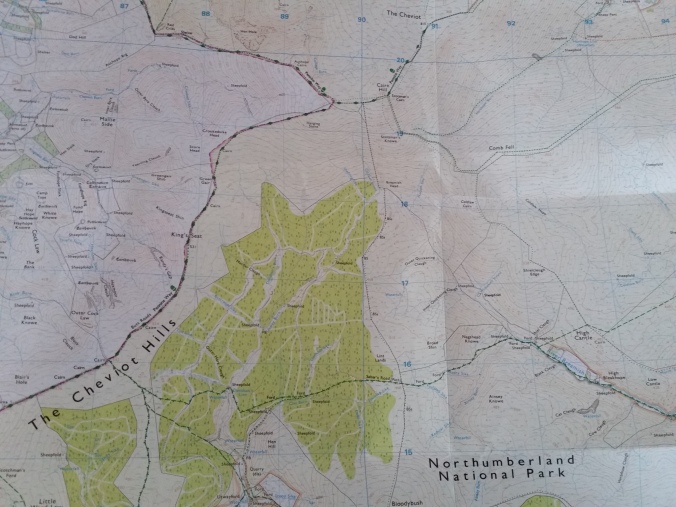 The boyfriend and I are about to set off up to the Scottish border to spend two days walking over the sparse and volcanically formed Cheviot Hills – subsequently bagging volcano number nine in my #40by40 quest.

I have to admit, I’m a little excited. All that fresh air and open space – not to mention another volcano – I’m feeling giddy just thinking about it.

But several weeks ago, I wasn’t this cock-a-hoop.

Because the whole trip was in jeopardy.

The boyfriend’s father, you see, had a nasty stroke and ended up in hospital. He’s still there, sadly, with a blank space next to the expected discharge date.

As you can imagine, concern, questions and uncertainty have been rife. Was he going to be ok? How long might he stay in hospital for? Will he get to go to the pub again? Should we get a downstairs toilet?

Understandably, my stress levels rose and there were several sleepless nights worrying about worst-case scenarios.

After a couple of weeks, the topic of the September trip came up. The original plan was to do a two-day walk across the Cheviot Hills, ticking off volcano number nine, followed by a six-day traverse along Hadrian’s Wall from east to west.

But now, we had a dilemma.

Do we scrap the holiday – all 11 days – in case the boyfriend’s father had progressed enough to be able to come home or do we continue to embark on the adventure and cross fingers that we don’t get any “midnight calls” while we’re in the middle of nowhere with possibly no phone signal?

We ummed and ahhed for days.

I had that sickening feeling that, yet again, failure was on the cards; another volcano attempt quashed by forces outside my control. I also felt a teensy pang of guilt for still wanting to go on holiday while the boyfriend’s father was stuck in hospital. (Bad girlfriend, I know!).

In the end, we made a decision – we’d cancel the Hadrian’s Wall section of the trip but keep the volcano walk.

I was equal parts sad, equal parts relieved. But in all honesty, it was the best option given the circumstances – a short enough break so it didn’t seem like we were forgetting or neglecting the boyfriend’s father but also long enough to get away from the stresses of “normal life” and the uncertainty surrounding his dad as an opportunity to reboot.

I started to pack.

So, Cheviot Hills and volcano number nine, here I come. The question is, can I make it through the heavy rain and depressingly cold temperatures that are forecast?

Getting caught in the rain in NZ several years back – obviously this is not the attire I’ll be wearing for the Cheviot Hills!