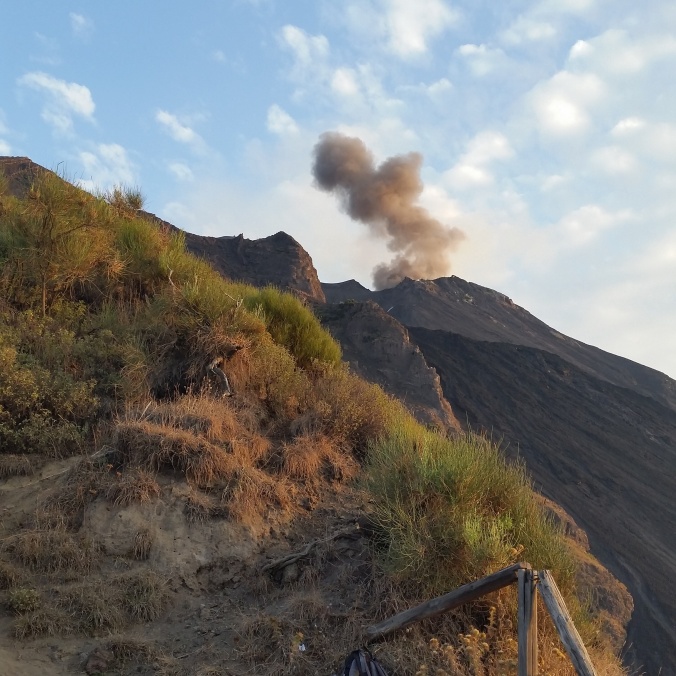 That moment I got up close and saw my first active erupting volcano will stick with me.

I was in the Aeolian Islands, just north of Sicily, gorging myself on quite possibly the world’s best pizza, when suddenly everyone in the restaurant went wild, turning and pointing behind us. Paula, beside me, ferociously grabbed my arm and demanded me to “look, look, look”.

High above us the volcano Stromboli was performing a fire dance. Giant spurts of fiery red lava erupted, glowing neon against the night sky like fireworks. The show was brief, a mere few seconds, and then darkness and quiet, except for the excited murmurs around the restaurant. Everyone stared transfixed on the crater, cameras at the ready, waiting for the great giant to blow again. But Stromboli, one of the most active volcanoes in the world, doesn’t erupt on demand and the thought our delicious pizzas might go cold meant our attention drifted and we continued to eat.

We were fortunate though, Stromboli decided to entertain us with several more fire displays of varying intensity – some were dramatic spurts of molten rock flying up into the air and falling in arcs, others were more subdued, just a blurred throbbing amber glow lighting up the steam and clouds. We ooed and ahhed appreciatively – but failed in getting the perfect photo of the volcano in action.

It was amazing; such a buzz. It capped off the perfect day – we had already hiked halfway up Stromboli earlier to witness its smoking crater but we hadn’t experienced the spurting lava show during day light hours. Yet to be so close to the volcanic activity was invig

The next day, however, was the real deal. We were to hike to the summit of the 926m high Stromboli, where a natural viewing platform existed. Here we would look down on the crater and watch the lava show as night descended and then make our way back down the volcano in the dark. It ticked every adventure and thrill seeking box.

So there we were, a conga line of a couple hundred people slowly zigzagging our way up to
the summit. We passed large chunks of cooled lava rocks, some so red with iron they looked like they had been spray painted.

The higher we got the more ash-covered the ground became – it was fine like sand, and made the uphill walk slow and laborious as with each step our feet sunk into the ash and lost the power to push off.

We finally reached a shelter just shy of the ridge to the summit as the sun was starting to turn the sky brilliant shades of peach. From here, as we waited for the other groups to view a close up of the crater, we watched Stromboli puff billows of white steam, with the odd hiccup of black. 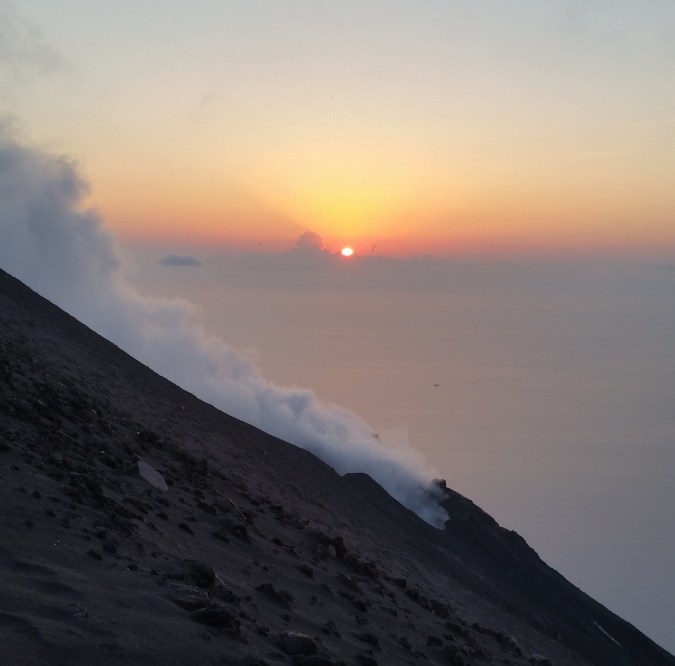 As the last of the sun’s rays started to disappear, we were instructed to don our helmets and head torches and we headed off in single file into the smoky gloom where the summit was hidden. After around 15 minutes and in the growing dark, we formed a semi-circle on the viewing ridge. We urged the crater below us to put on a show.

We urged and urged.

But all we got was clouds of steam blocking the view. For almost an hour we stood there, in face masks, waiting for the volcano to blow – it did, we could hear the rumbling, but we just couldn’t see the lava from where we were standing.

As it became obvious we wouldn’t get to see the lava dance, the guide directed us to descend, our head torches picking up the flecks of ash particles in the air brought up by our walking boots.

Despite the lack of lava, we were exhilarated by the experience and what was still an adventure. All I was left thinking was: “Again, again!”

I travelled independently as a tour with KE Adventure Travel and all opinions are my own. This blog is part one of three on the Sicily volcano series – Stromboli was in fact my fifth volcano. The other three volcanoes on the trip will be covered over the next two weeks. 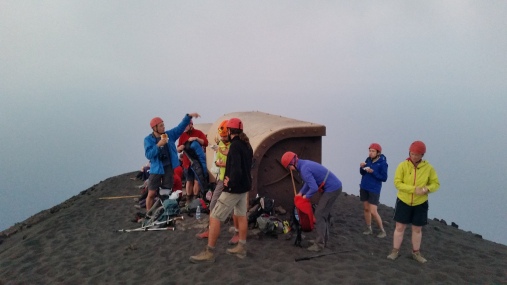 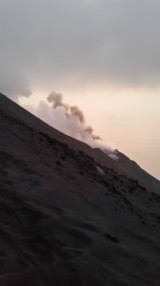