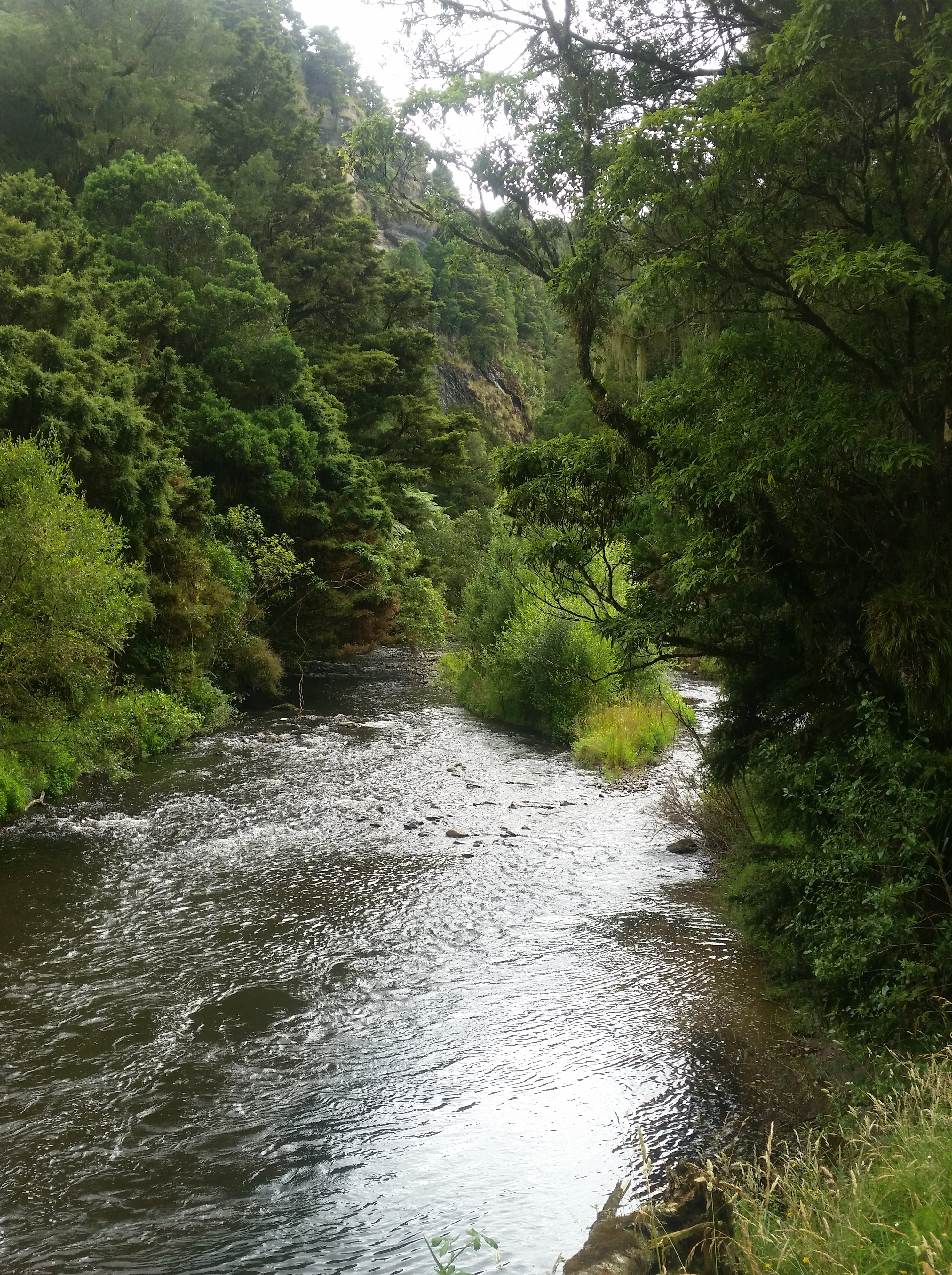 Day 60 of #WalkNZ didn’t start well – and it didn’t get any better.
What with a terrible night’s sleep and then being shadowed for a kilometre by a greasy-haired, gap-toothed cyclist out of Te Kuiti, I guess it didn’t bode well for what was to come – the Mangaokewa River Track; a 15km riverside walk that takes the Te Araroa hiker out of Te Kuiti and into the back country farmland of New Zealand.
I hadn’t heard any rumours about this track so what could possibly go wrong?
It started when I failed to see the bright orange marker triangle on the right that would have nicely taken me up to the river bank.

Instead I marched down to the river wondering if I had to ford it already.
I looked around – aha, a trail on this side of the bank.
I just had to get around this tree and bypass the river and all this mud and get up that bank.
Then before I could say “do you think this mud is slippery”, I found myself bum-first in the wet, gloopy black stuff, almost entirely coated from the tips of my ties to my waist.
FFS and other rude words exited my mouth as I tried, rather unsuccessfully, to climb out of the river mud, my very heavy pack resupplied for seven days being a major hindrance to this.
The more I squirmed and tried to manoeuvre myself into a standing position, the more caked in mud I became.
More rude words exited my mouth.
Finally I was upright and still cursing, just as a local dog walker came by along the same route I’d taken.
“Be careful, it’s a little bit slippery here,” I said, flicking bits of goop from my shorts and legs.
“I can see that,” he replied, calling on his dog to successfully pull him up the bank and away from the mud.
Having regained some composure, I attempted to scale the slippery bank again. I almost ended up on my bum again but luck this time was on my side.
Once on the bank and surveying the messy damage to my shorts (clean on that morning) and my pack, I noticed my mistake and the path that missed the river mud.
More rude words exited my mouth.
I cleaned up best I could without falling back in the river and set off at a trot.
The first hour or so was a pleasant path not part of the 15km river track, although it was a bit overgrown in places, which probably should have set my alarm bells ringing.
Instead I was brooding on my morning’s misfortune, away inside my head, thinking about how fed up I was with mud and the trail and toying dangerously with the idea of hitchhiking 38km the next day with some Germans so I didn’t have to walk the darn distance along gravel back country roads.
After some time, I came upon a picnic area and a delightful little stream.
I spent almost 10 minutes sitting in the cool water fully clothed, letting the current wash away the morning’s misadventure.
I needn’t have bothered.
Over the course of the next six hours as I walked (although walked isn’t really the word to use) the Mangaokewa River Track I fell in a bog, slipped on the track’s edge, almost careening head first off the bank into the river several metres below, and slid down another bank on my bum resulting in some awesome scratches on my butt cheeks and remuddifying my shorts.
This quickly became the track from hell.
It was narrow, not even a foot wide in places. And where it wasn’t narrow it was washed out, requiring mountain-goat agility to bound the gaps.
The trail undulated, the uphills and downhills steep, slippery and perilous.
And all the while, I was a mere few centimetres from a steep, sheer drop down a bank to the gurgling river below.
A half-dead sheep slumped at a stile below a steep hill, flies buzzing around its still breathing body, highlighted the perils of this track.
This was intense – or perhaps crazy.
Another picnic area, complete with table and chairs (how they got there I have no idea) was a welcome break from the finger-biting trail.
Two German blokes – a father and son – I had met over the past few days arrived at the picnic area.
We bemoaned the trail.
They decided they weren’t having any more of it, and after the next hill climb we parted ways – them towards the main road and a hitchhike, me back towards the river and the treacherous trail.
“Good luck,” I shouted at their retreating backs, not sure whether I would ever see them again.
“Where you’re going you need more luck than us,” was the reply as they rounded a corner.
And so it was just me and the river track – only the thought that another tramper I had met would be walking through tomorrow was comfort for what lay ahead.
For several kilometres I tackled the trail alone, tiptoeing along narrow ledges, pushing through overgrown undergrowth, wandering through fields of wildflowers and dense bramble bushes, and summiting a hill with a near vertical death drop.
All the while, the calming tinkle of water over rocks rose up to my ears. The incongruity of the situation didn’t escape me.
Then, just kilometres from when the track should end, I lost sight of the orange markers, entering a dark corridor of ponga ferns and broken, dishevelled trees.
I cursed, looking wildly around me, the only thing for certain, the river was on my left.
GPS told me the trail proper was only on the other side of a thick pocket of gorse.
I looked at it considering my chances and, wishing I had a machete, ploughed through.
Scratched like a pin cushion, I emerged onto the trail, triumphant.
The makeshift campsite shelter in a paddock soon came into view, a symbol of security after a day of danger – one of the hairiest days on the trail so far. 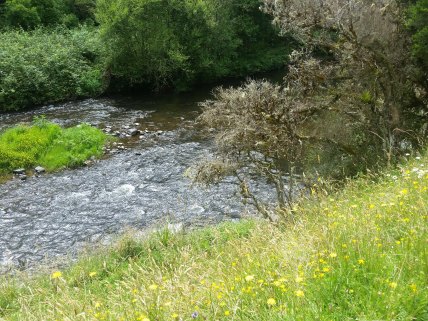 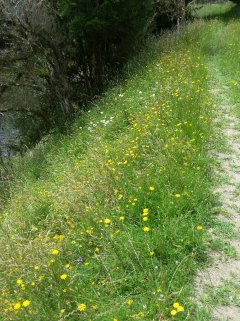 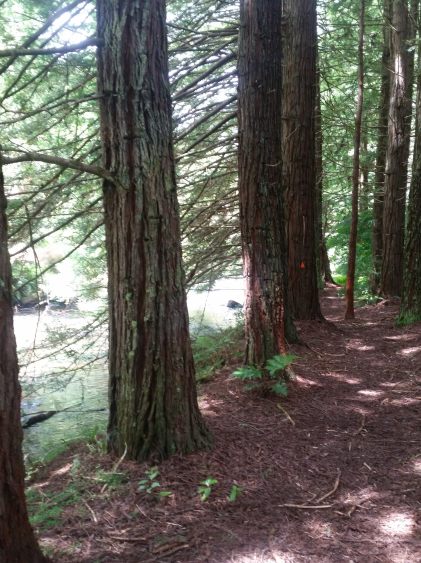 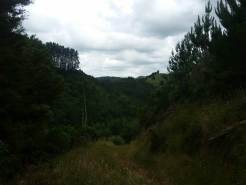 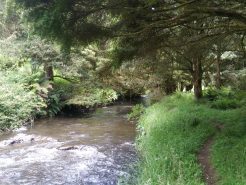 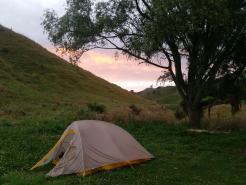