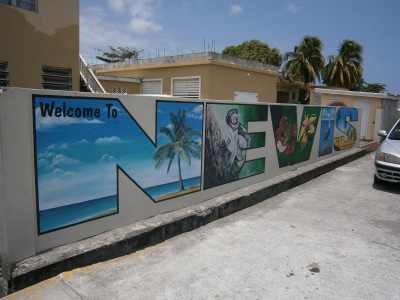 After a two and a half hour, sweat-drenching walk in humid 31 degree C heat in Nevis (I thought the walk to the capital Charlestown would be a simple amble – I was wrong) I made the executive decision that taxis were perhaps the better, albeit more expensive, option to get around the Caribbean island.
Not only were they air conditioned, I got to talk to some interesting taxi drivers.
Take Tin Tin, for example (seriously that was his real name, and he wasn’t named after the cartoon character). A lovely 55-year-old man with a lilting Caribbean accent, soft white fuzz on his head and no wrinkles. He worked for the Nevis Government’s water department and taxied in his spare time.
It also transpired he was super keen to have an English girlfriend and ultimately move to England. He loved Englandand had lots of family there, you see.
Within 20 seconds of settling into the cool confines of the taxi, his eyes hooked on me in the rear-view mirror, telling me of his love for England. Yes, yes, it’s great I agreed – of course, apart from the fact the weather is so much nicer in Nevis.
Talk of weather? He was having none of it.
Instead he said: “I am a nice person. I am decent yeah. I could be a stay-at-home boyfriend. I can cook and clean – I am a good cook; I like cooking. I look after myself; work out, you know. I like things tidy. I would be a good boyfriend.” He nodded his head while looking at me intensely in the rear-view mirror, then added: “You seem like a nice girl.”
Good Lord, was this man, old enough to be my father, propositioning me? What, after five minutes of being in his taxi?
I glanced at the taxi door, considering my options of throwing myself onto the pot-holed road should he indeed get heavy. Instead, I played the ignorance card, pretending I didn’t realise he was hinting at more than small talk during a taxi ride.
“God, I wish my boyfriend was more like you,” I enthused. “He is a terrible cook. I have to do all the cooking. And all the cleaning. He doesn’t do cleaning.”
Tin Tin looked suitably crestfallen after this exchange but then, after a brief pause, he eagerly asked: “Do you have any single friends living in England?”
Not quite what I was expecting, but I started to list off my friends and their excellent attributes – talking if anything to stop him from thinking I might be his soul mate.
One friend, he particularly liked the sound of. He threw a business card over the seat to me.
Suddenly I was transformed into matchmaker, tasked with giving the business card to my friend, who is then to get in touch with Tin Tin and organise a trip to Nevis. They will hang out, he said. He will treat her well, cook her dinner, he said.
“Now don’t forget to give her my business card. You promise?” It’s a question he asked three times before I finally reach my dinner destination. It’s a question he asked three more times on the way back to the hotel. He appeared to have fallen in love.
The next day Tin Tin was waiting in reception for me. I’d mentioned the night before that I wanted to visit the botanical gardens. Bugger, I had hoped to avoid him – I didn’t want to be the one to break his heart.
I reluctantly climbed into the taxi, bracing for the onslaught.
It began.
“Did you talk to your friend?” Opps, sorry, no.
“But you will talk to her? You have to promise you will give her my business card.” They have to organise for her to visit Nevis, he said. He can guarantee her a good time.
But she may not be able to visit, I said. He disregarded the comment with a flick of his hand. They will talk on the phone instead, several times a week. “I have an international calling card,” he said.
And so it went on.
Finally on returning to the hotel, he asked for a photo of my friend, the first time he wanted photographic proof of her existence. With dodgy internet access, I found one on Facebook. He perused the photo for several moments.
“Ok,” was all he said, nodding and handing the phone back to me.
His final words as I climbed out of the taxi were: “Now don’t forget to give her my business card.” He drove off, the dust from the car wheels hanging in the hot air.
That was the last time I saw Tin Tin. The next day was Monday. I assumed he was working his nine-to-five job. I wish him all the best in his endeavours of love.
But I do feel bad; his business card is still in my handbag pocket.
Have you got a crazy taxi driver story?