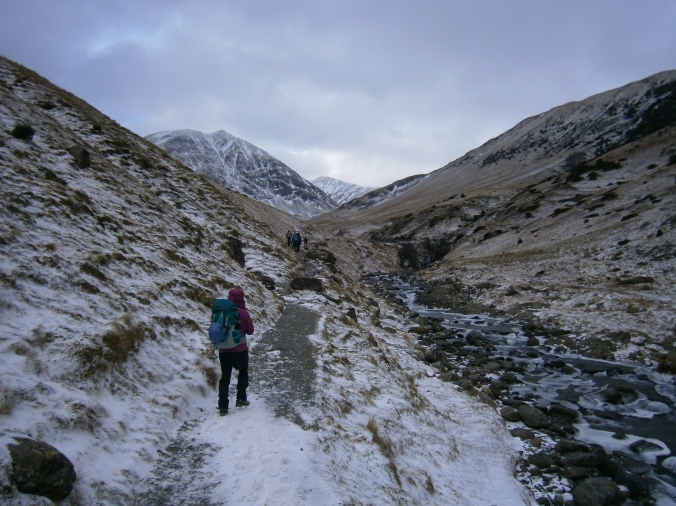 “Let’s do this cool gully,” said Richard, discussing the Sunday adventure plans in the Lake District, while sizing up his crampons and ice axes.

We were still in the cosy confines of the hut, nursing hangovers and savouring strong coffee, yet I was absolutely terrified of climbing a wall of ice with just some spikey bits of metal being all that would stop me from falling down the mountainside.

Even before setting eyes on the beast, just the thought of my first ice climb was making my hangover worse. I felt positively bilious.

All the usual doubts rose up and crashed down on me like a tidal wave: I’ve never been ice climbing before, how was I going to cope? I’m not good enough yet so how can I possibly do an ice climb? I don’t have the right kit with me. I don’t want to let the others down. What if I freak out and get stuck? Or worse, what if I fall off the mountain?

To be honest, that last thought wasn’t the one that concerned me most. It was the others – the ones that were like neon signs pointing out that I just wasn’t good enough.

The thoughts revolved around my head as I stared glumly at the muddy coloured liquid in my coffee cup, wishing it was a black hole that could transport me to somewhere else entirely.

I laughed lamely at some joke, my mind a million miles away chewing over doubts like scratching an itch that doesn’t go away. But before I knew it I was agreeing to this expedition up an epic ice-covered gully on Helvellyn.

I could feel my heart hammering to be let loose. My palms felt clammy. Tears started to prick my eyes; a quick eyelash flutter did little to stem the flow. I hurried to the bathroom, hiding in a stall, letting the salty streams leak down my cheeks.

It was hard to pull myself into some semblance of order – I had to hide in that toilet stall three times before we left the hut – but I got in the car and all I hoped for was that the doubts would pass.

And weirdly enough as I click clacked over the stone path towards Helvellyn, sucking the bracing air into my lungs and admiring the patchwork of frozen water on the meandering river, my thoughts turned to the beauty of nature and the joy of walking in her midst.

Even as we turned off the path and started to traverse a snowy slope towards the base of the frozen gully, my doubts didn’t clamour for attention. But as the traverse continued and the gully grew closer I realised it was probably too late to turn back now. The ice climb was on.

Despite my earlier moments of fear and trepidation, I was now focused and strangely at ease. There was no room for doubts, although I could have easily let them flood back in. Concentrating on the fiddly task of putting crampons on certainly helped.

And then without even really realising I was doing it, I had walked out onto the frozen compacted snow at the base of the gully and was looking up at an expanse of white ribbon sloping up the mountain. It was cold and raw and glistening – a giant sheet of ice just begging to be climbed.

The others started off, hacking their crampon spikes into the icy snow, followed by a corresponding thwack of the ice axe. Like a trail of ants in single file, they inched on tiptoes up towards the sky.

I assumed the pose and took a deep breath. This was it; no turning back now. The only way was up, I told myself.

For a fleeting moment I thought the doubts might crowd in but I was in the zone. It was just me, my crampons, ice axe and an almighty slab of frozen snow. All thoughts beyond the process of stamping the metal spikes of crampons and ice axe had left me. With determination I painstakingly hammered my way up the ice sheet. 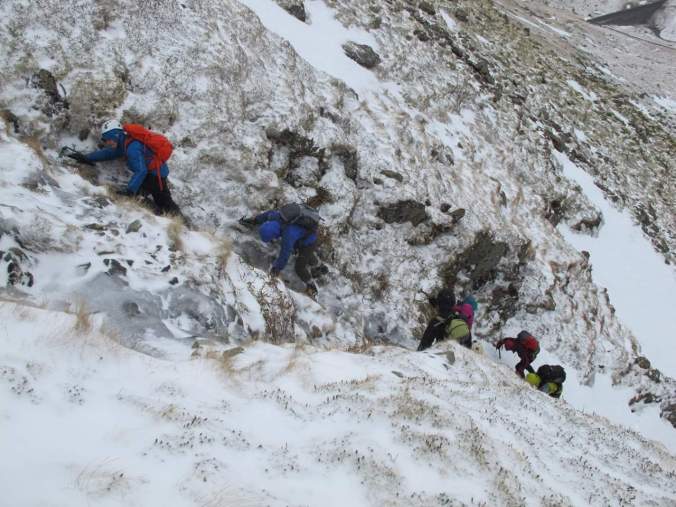 Photo credit: Gill Black – I’m at the back with the red backpack

There was immense pleasure to be had thwacking the ice axe into frozen turf as I scaled a particularly slippery frozen waterfall while balancing precariously on the points of my crampon spikes. The concentration was intense making sure my feet were positioned accurately. The pain of taut muscles radiating up my calves was the impetus to keep moving.

At several points in the climb I steeled myself to risk a quick look beneath me and out to the snow-dusted valley below. The peek at the view was so quick that all I could register really was that we were very high up and the valley, a very long way below. But I didn’t allow myself to doubt – I just kept moving.

And then when I thought the climb was never going end, when I couldn’t feel my fingers or toes from the gripping cold, when each hacking step was painful, when I could feel the temptation to begin to doubt, the crest of the climb appeared.

On reaching the top, I raised my ice axe and walking pole into the air, shouting “woo hoo” like a mad woman possessed, a crazed and ravaged smile clearly etched across my face.

I’d done it – my first ice climb. And achieved without any malign doubts cropping up. Boy did I feel good in that moment – a trillion times better than when I was back at the hut weighed down by negativity.

So, what does this experience show?

It shows that the ice climb itself had nothing to do with my doubts. I was worrying before I had seen the climb, before I knew what it entailed, and yet, once I was there, I didn’t doubt once. The doubts I experienced at the hut were purely my thoughts creating a mental construct, which I thought at the time was related to the ice climb.

This experience also shows there was no truth to my doubts. I accomplished the climb, end of. But achieving the climb didn’t make me good enough; I was always good enough, right from the start. It was just my thoughts that were telling me I wasn’t.

Finally, there is something to be said for focusing on the present moment. When I was on that ice climb all I was thinking about was putting one foot in front of the other. I was in the zone. I didn’t worry or think about what ifs or what was further up ahead. All I did was focus on the next step I had to take – and by doing that I was able to make the climb all the way to the top.

Who would have thought climbing an ice sheet would be so revealing?