As you know it’s not quite the progress I was hoping to have made but in the name of positivity, you have to admit, it’s progress of sorts.

Now that I’m taking a more flexible approach to achieving my quest, I’m also being a little more creative and allowing some lines to be blurred. And so, when my mother informed me that Scafell Pike, England’s tallest mountain at 978m, just happened to be part of a volcanic igneous rock formation (the Borrowdale Volcanic Group) formed some 450 million years ago, it played with my mind.

According to good old Wikipedia, this area in England’s Lake District is believed to be the remains of a volcanic island arc (basically an archipelago of volcanic islands sort of like the island arcs in the west Pacific) where two tectonic plates met. And by all accounts it was very explosive, with eruptions comparable to the likes of Mt Pinatubo, Krakatoa and Mount St Helens.

I’d just climbed Scafell Pike – purely on the premise it was England’s tallest mountain and without knowing its volcanic origins – but the thought of adding it to my slowly growing list of volcanoes was very attractive. A friend suggested that perhaps I could include it as an “accidental volcano”.

Let’s not get into an argument on semantics here but suffice to say I believe an ancient volcano is still technically a volcano.

And anyway, the slog to the top of Scafell Pike was worthy for its inclusion. It might have started out as a walk in a park but it sure didn’t end up that way.

You see, we decided to take a “harder route”, going off the track and taking in a scramble to the summit. It started off fine; a gentle stroll deep into the valley with the lively River Esk to our right. It was gently uphill, no big deal, and the puffy clouds allowed the sun to burst through at intervals.

Everything was fine until we had to cross the river at the Great Moss and make the steep ascent up the southern flank of Scafell Pike. In hindsight, crossing the river was probably the easy bit, though it required several leaps of faith.

The ascent of 600m on the other hand was, in a word, crap. It was so steep we couldn’t really stand up straight and I was grasping at clumps of grass just to avoid falling backwards down the slope. For someone who is still unfit, the climb was slow and painful and a constant reminder that I wasn’t getting any younger. If this was the scramble, it was the least enjoyable scramble ever. 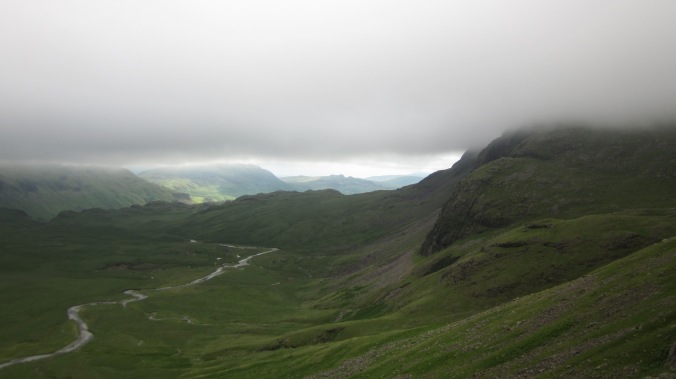 And then we got sucked into the cloud that had been hovering over Scafell Pike’s summit, obscuring it from view. Pretty soon everything was obscured except for a radius of 10m around us. We were in our own little world and every rocky outcrop looked like the one before it and the one before that. Somewhere along the way we missed the scramble we were supposed to do.

It soon became clear that perhaps we were a little lost, although we knew the summit was just over yonder; you know, just over there… somewhere. After walking blindly for a while, and giving up on map and compass, we put our faith in GPS and Google Maps. Aha! The summit was in touching distance, according to the technology, so we walked further into the gloom.

Then somewhere just in front of us we heard voices – hurrah there were other crazy people climbing mountains when they couldn’t see where they were going. We walked towards the voices. Out of the cloud materialised the smudgy figures of two people. Crouched down beside a pile of rocks to keep out of the buffeting wind, was a couple trying to brew a hot drink on their gas cooker.

Trying not to sound too overjoyed to see another human being, I asked the question: was this the summit of Scafell Pike? “Well you can’t go any higher,” was the answer.

I was briefly relieved until I realised we still had to get down the mountain. And with no view forthcoming and just a really annoying wind and a lot of wet cloud, we set off after reorienting ourselves, descending out of the cloud and heading home for tea.

Scafell Pike was a lot of effort for a rather drab view. It might not be a “proper volcano” by some people’s standards but after that experience it’s still a beast to me and certainly worthy of its heritage.

Eight volcanoes down, 32 to go.