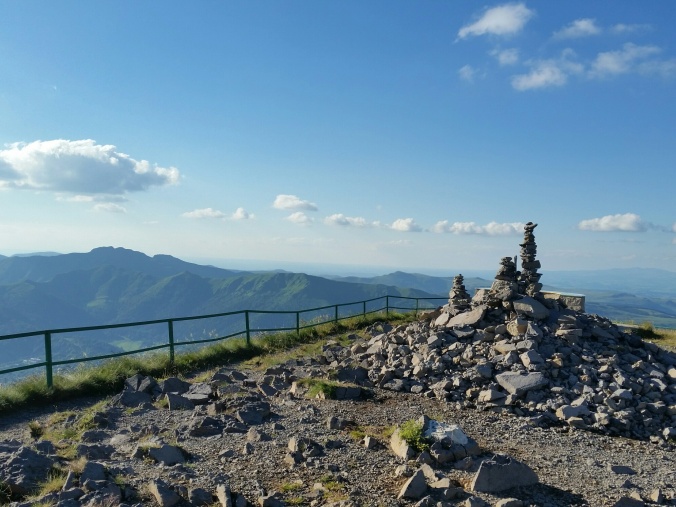 It had been an awesome three days in the Auvergne region in France walking a section of the GR400 route and climbing volcanoes.

In three days we had hoped to climb four volcanic peaks as part of my #40by40 quest to climb 40 volcanoes by the age of 40 but we’d only been able to tick off three (because of our leisurely pace) – Puy Mary, Puy Chavaroche, and Puy Griou (the latter hadn’t even been on the original list).

I’d been a little bit gutted that we hadn’t been able to make the last two, Puy du Rocher and Plomb du Cantal, but as I was quickly coming to learn with this challenge, it was no easy street and there were bound to be blips and bumps and failings. I just had to be flexible, not give up, and remember that everything would be ok in the end. END_OF_DOCUMENT_TOKEN_TO_BE_REPLACED

After a wet day with thoroughly uninviting views, we awoke in the little French town of Mandailles to what promised to be better weather. There were pockets of blue in the sky (hurrah!) and while the tops of the higher mountains were still shrouded in cloud it looked like it was only lingering like a bad smell.

Today was to be our last day of our three-day hike along a section of the GR400 route in France’s Auvergne region. So far, we had been buffeted by gale force winds in an almighty thunderstorm, my hiking companion’s tent had nearly blown off the side of the mountain, and we had climbed two volcanoes as part of my #40by40 quest to climb 40 volcanos by the age of 40.

I might have been a bit quiet on the blog front as life has been seriously manic doing DIY ready for the return home of the boyfriend’s father after a 10-month stint in hospital following a bad stroke.

But slowly things are returning to normal, or as normal as things can be.