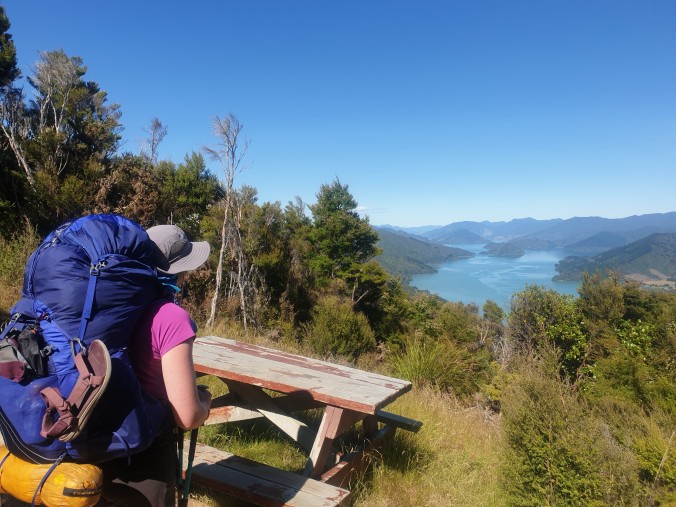 It was cold. It was grey. Where the hell was summer?

I shivered as I did some stretches before the official start of #WalkNZ part 2 began.

Here I was at the top of the South Island of New Zealand, and less than a year since I was last here ready to walk the Queen Charlotte Track through the Marlborough Sounds along the Te Araroa trail.

Back then it was the middle of February. That part of the country had been gripped by a six-week drought and a huge forest fire raged in a mountain range close by.

The Queen Charlotte Track was tinder dry then and authorities closed the middle section because the campsite water tanks were bone dry and to guard against the fire risk. As a result, I was forced on to the road for a mundane and dusty road walk.

This year, however, the track was open. There was camping to be done and views to be had.

I was, however, thankful that the kind people at DOC (Department of Conservation) had decided to put in a new trail, which was nowhere near as steep as last year.

The going was much easier than I expected, although I can’t exactly say I leapt up the hill.

My cardio training in preparation had been borderline at best.

Twenty minutes on the step machine at the gym doesn’t really prepare one for a 20km uphill walk carrying 15kgs.

You would have thought I’d learnt this the second time round. But no, this was clearly going to be a get-fit-as-I-walk jobby. Again.

That said, I felt stronger than when I started out on #WalkNZ from Cape Reinga back in Nov 2018.

Helped, perhaps, by a marginally lighter backpack – although I was only carrying four days worth of food. And also all the stretching and leg presses my British personal trainer had got me doing for the past six months.

And so, day one back on the trail wasn’t all pain and glum thoughts along the lines of what the hell was I thinking.

Instead it was rather enjoyable being back in native New Zealand forest and having one of my friends join me for company.

And then it started to rain.

What started as a drizzle quickly became a blanket of water. The new walking shoes were getting their first taste of the New Zealand walking conditions.

By the time we arrived at the campsite, we were positively dripping.

A free glass of wine put a smile back on our faces.

It was enough of a boost to keep from throwing a wobbly when I attempted to put my tent up in the rain.

I can confirm that a tent not protected by the outer fly sheet gets very wet when it is raining. I can also confirm that micro quick dry towels are essentially useless when used to dry the inside of said wet tent.

Needless to say it is quite annoying when the rain stops and the inside of your tent is wetter than outside.

But day 2 and 3 dawned to clear blue skies and bright sparkling sunshine. Absolutely perfect for the section of trail I hadn’t done last year.

And my goodness, did the Queen Charlotte Track deliver.

Green floating islands that melted into the sparkling waters. Waters that took on every blue hue possible, from deep blue to turquoise to sky blue to green to bubble gum. 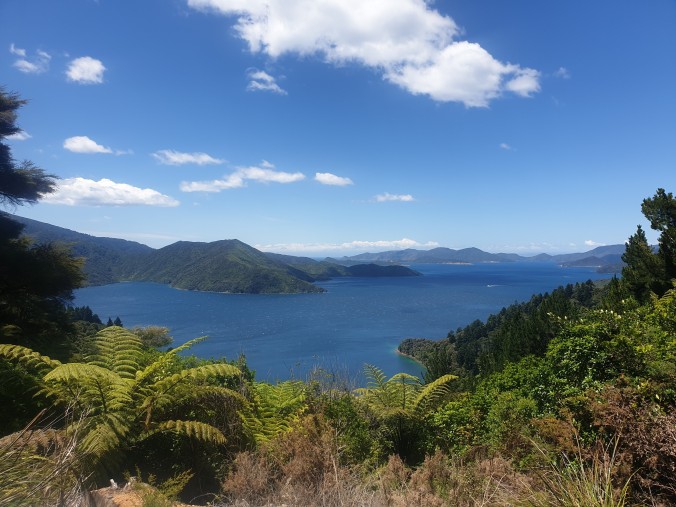 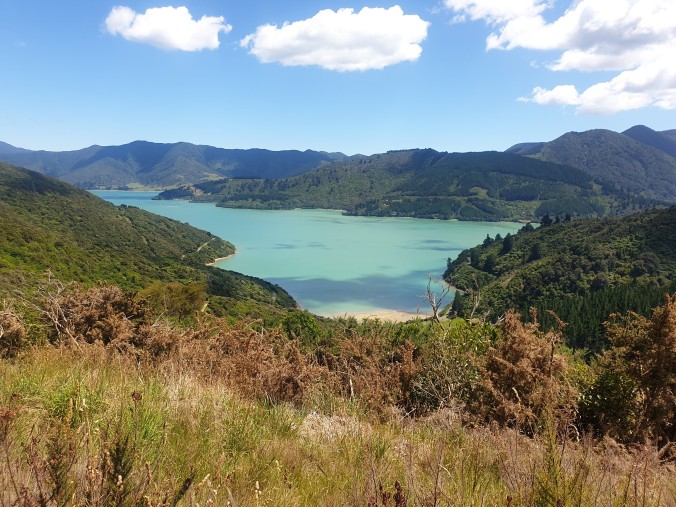 The trail was pleasant – tree roots and mud were few and far between. The native bush was resplendent, an ancient giant rimu tree a real delight.

The wildlife on the other hand were not so delightful.

The native New Zealand wekas (sort of like brown chickens) were very curious and quite ready to make off with any piece of kit you happened to leave lying around (last year an American lady lost her new bra to a weka that sneaked into her open tent).

This year, one weka was particularly keen on stealing my whole tent. It dragged it a few centimetres while my back was turned to pick up my tent pegs before I realised it was disappearing.

Later that night, my tent was visited by a mystery monster. At first I thought the weka had returned but figured it was more likely a possum rustling under the fly.

The next thing I knew, plastic bags were being scratched at.

In fright, I grabbed my head torch and aimed it at what I saw was a new hole in my inner tent. There a cute white snout was poking through sniffing at my food bags.

What a cute white possum, I briefly thought before fear gripped me again and I shouted blue murder loud enough to wake the whole campsite.

Finally it took off, leaving me pumped with adrenaline but with all my food.

The next day, I came across a poster for a missing white cat.

Could it be? Could my midnight intruder have been a cat instead of a cute white possum?

I messaged the owners.

No, they had found their cat seven days earlier. Perhaps my mystery monster was in fact a stoat, they suggested.

It will be a mystery that will never be solved.

Back on trail, day 4 was like the others: more forest, more views, more pleasant and enjoyable walking.

I didn’t really need a rest day in Anakiwa, but I gate crashed my cousin’s holiday. Her cooking was a good enough reason to stay two nights.

Then it was on into Havelock, greenshell mussel capital of the world.

The road walk on a hot day reminded me of how much I hated road walks but the trail section and its views more than made up for it.

So that was the warm up done.

The dastardly Richmond Ranges are next, the proper mountains where my knee started to play up last year. It’s a brute of a section and I’ll be carrying 10 days worth of food.

The Richmond Ranges and I, we have history. There is no love lost that is for sure. As such, I’ll be finding an alternate route down through a forestry track.

But it’s either that or Mt Rintoul, and after last year I just don’t fancy it. I’ll take my chances with the forestry track.